You are here: Home / Deep Thoughts/Hot Takes / How to Elf on the Shelf for Desperate Parents Who Are Out of Ideas 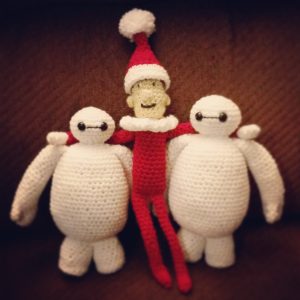 This is our elf, Bert.  Isn’t he adorable?  He’s pretty boring, but occasionally he’ll get together with his friends for a good time or make a mess somewhere (thanks a lot, jerk, like I don’t have enough to do).

But, we’re not here to talk about Bert.  We’ll talk about him some other time.

We have gathered here tonight to talk about your nemesis:  The Elf on the Shelf.

Listen to me.  Lean in realllllly close, because I am going to whisper into your earholes a secret that is going to make your life SO MUCH BETTER for the rest of the month.  I swear, I have the secret to holiday happiness right here on this little tiny corner of the Internet where nobody hardly ever visits…but that is where the best secrets are usually found.  And, this magic is totally free.  Yep.  Not going to cost you one red cent, which is awesome because you’re already broke from buying Christmas (yes I know HOLIDAY gotcha I’m an atheist so whatever you are and whomever you are buying for I’m not trying to start a war on Christianity or not start a war on Christianity here presents for everyone everywhere) gifts.

(Remember, this is a secret.  Pinky swear you will only tell other parents who are fed up with this goddamn Elf on the Shelf business, because otherwise you will be SHUNNED.)

Rest of you guys with me? 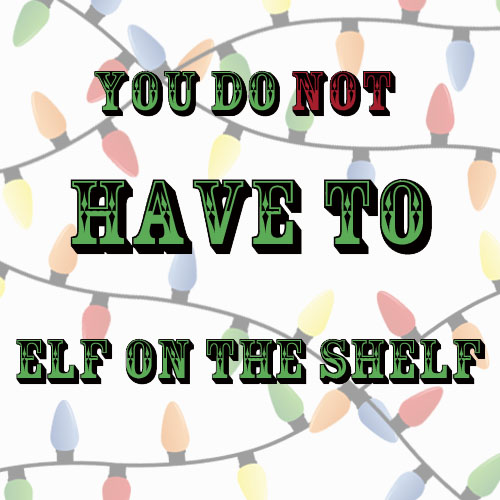 I know your kidlets are amused by your elf’s antics.  I am sure you get mileage out of “THE ELF WILL TELL SANTA YOU’VE BEEN NAUGHTY.”  Maybe you even eek out some appropriate behavior now and again with the threat of Santa’s spy spilling the beans before the big day.  You might even have fun setting up your elf’s next big adventure/mishap/caught in the act of doing something inappropriate (in which case you have too much free time on your hands and I have actual housework that needs to be done so call me?).

Or maybe you are that parent who goes to bed and wakes up in a cold sweat at 3 a.m. remembering you didn’t set up your elf’s next elaborate adventure or, even worse, forgot to put any planning into it at all.  (SHAME ON YOU.)  Dude, at 3 a.m. you are screwed.  Your brain is eggnoggyfoggy, your eyelids are encrusted in sanding sugar, and you’ve turned down the heat to save money for all those gifts so leaving the confines of your electric blanket would be risking hypothermia. 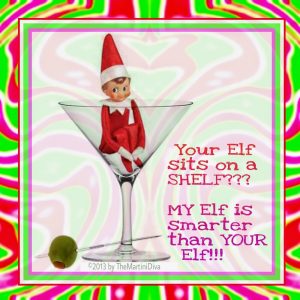 FUCK IT.  Go back to sleep.  Do not get out of bed and half-ass it.  Your kid will know in the morning, upon discovering you’ve plopped that elf into the closest martini glass (teehee look Elfie got drunk last night!), that you are a lazy motherfucker who forgot to move the elf.  And that, my friend, is inexcusable.  Elves on Shelves must never smell like martinis.  It’s right there in the rules.  What is wrong with you, anyway?

Do not be that parent.

With Elf on the Shelf, you have to go big or go home.  Your children are going to go into school the next day and compare notes with their friends.  Hell, their teacher probably has an Elf on the Shelf in the classroom, too.  When your child shares with the class “my elf was sitting in a martini glass holding some olives” you will be exposed as a) a lazy parent and b) an alcoholic because who the fuck has martini glasses within easy reach of an elf?

Or:  a parent who is at the end of their rope trying to compete with Elfness on the Shelfness. 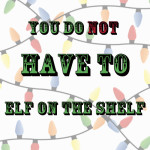 Say it with me. 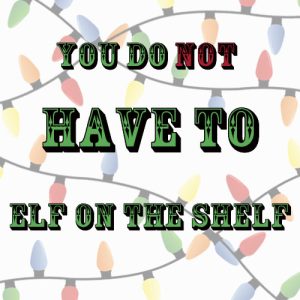 Keep saying it.  Loudly.  Make it your mantra.

Totally liberating, right?  I got your back.  Liberating stressed out parents, that’s what I do.  Yup.

Alright, so you might be stuck with the damn elf for this year.  Who wants to hear whiny ungrateful bastards complaining about their unresponsive, non-spying elf during the holidays?  NOT ME.  But do yourself a favor.  Bow out gracefully on Christmas Eve.  Here, I have written a script which you may feel free to copy. in your best calligraphy embossed with 24 ct. gold leaf on acid-free archival paper so that you can treasure it forever, and then pass it on to your kids once you let them in on the secret when they, too, are finally fed up with Elfing on the Shelfing.  It will be an heirloom.

Bye kids!  It has been fun!  You are the most well-behaved, adorable, brilliant, most wonderfullest children in the entire universe, as evidenced by the giant stack of presents under the tree.  You are such perfect children that Santa has decided that you won’t need me next year.  You had better fucking behave or else.  And tell your mom to lay off the martinis.  My suit is ruined thanks to her lazy ass.

So we still have some time left in December and if you’re going to keep up the charade for the rest of the month, I have cobbled together a list of actual Elf on the Shelf ideas for you.  Merry Christmas!

Popsugar featured 66 Elf on the Shelf ideas they found on Instagram.  I am LOVING the creativity and the photos are gorgeous.

Totally the Bomb has 30 “genius and easy” Elf on the Shelf ideas for you if you are ok with Elf on the Shelf teaching your kids to let the government spy on them.  (Check out her Stuff You Won’t Make section…many fun crafts lurk within.)

Our elf isn’t a spy for Santa, he just gets into stuff when I have free time and extra energy.  Busy Kids, Happy Mom has some cute ideas and also has one of those non-tattletale elves.

It’s about time for me to go drink a cup of eggnog while decorating our tree, so Merry Christmas to all and to all a good night!