Happy New Year!  May the force be with you, live long and prosper, and fight the power.  I am really looking forward to a kickass year and I hope you are too!

Without further ado…oops I did it again!  Fun with gelatin!  (No this will not be all gelatin all the time, this was just a quickie to go with our lucky New Year’s Day pork.)

Not from a cookbook this time, but rather an old advertisement.  “You make it right in the Dole Pineapple can!”  LOVE IT! 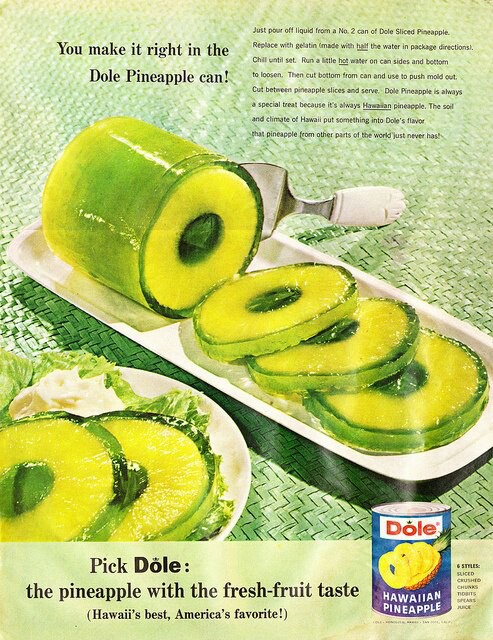 Instead of lime gelatin, though, I decided to use cherry flavor, because I was planning on slapping pineapple rings and maraschino cherries onto the ham and I thought this would be a cute addition to our very festive slapped together because adult humans (read:  ME) were tired New Year’s Eve dinner.  So I totally planned ahead.  Ham.  Jello in a pineapple can.  Yes that IS TOO dinner what is your problem even?

Things were looking good.  I drained the pineapple juice from the can.  (What is a No. 2 can?  They don’t sell those anymore so this recipe was obviously created by dinosaurs.  I used a 20 oz. can instead because there was a 2 on it.)

I also dropped a bunch of maraschino cherries into the center of the rings because I thought that might be supercute. 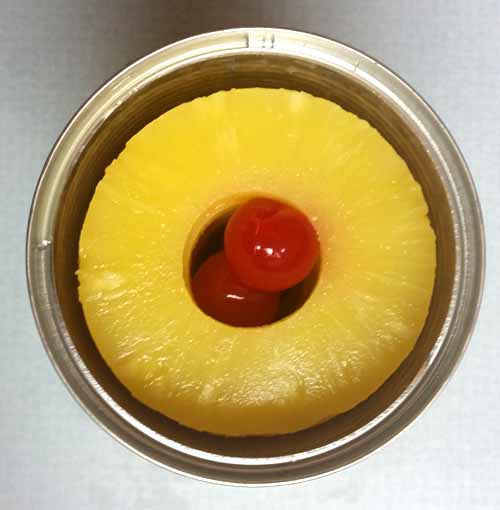 I made the sugar free cherry Royal gelatin according to the package directions, and then poured it into the can. 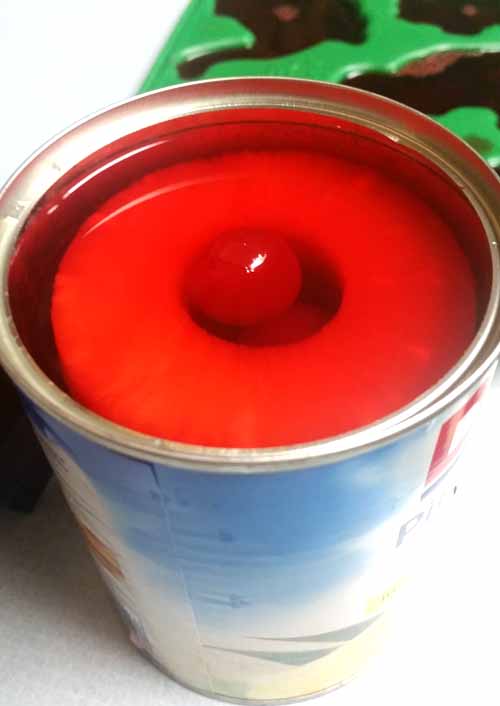 There was lots leftover, so I also made dinosaurs (an homage to the person who wrote this recipe) and part of a Tardis (because obvious). 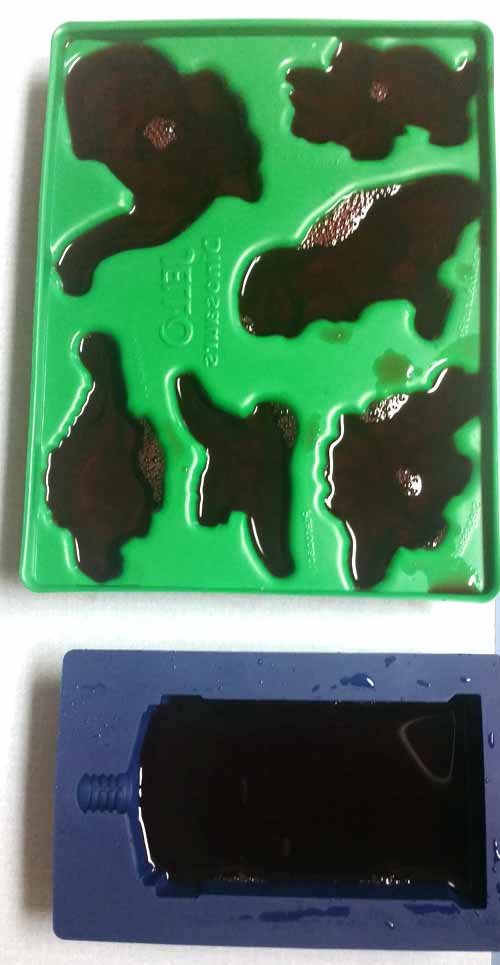 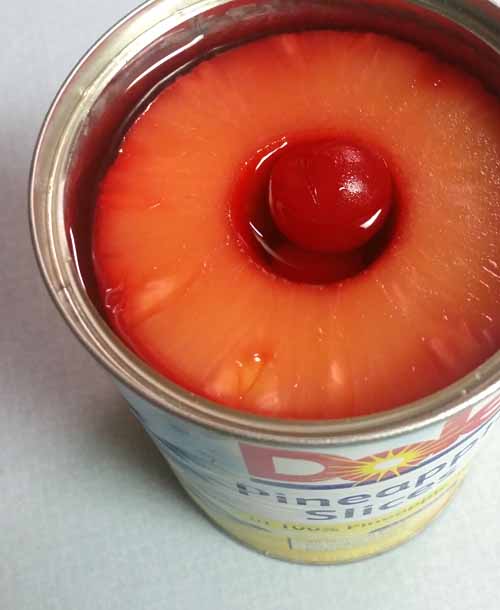 After placing the can in a bit of hot water for a few minutes to loosen the sides, I removed the bottom of the can with a can opener, and gently slid my glorious Pineapple Surprise out of the can. 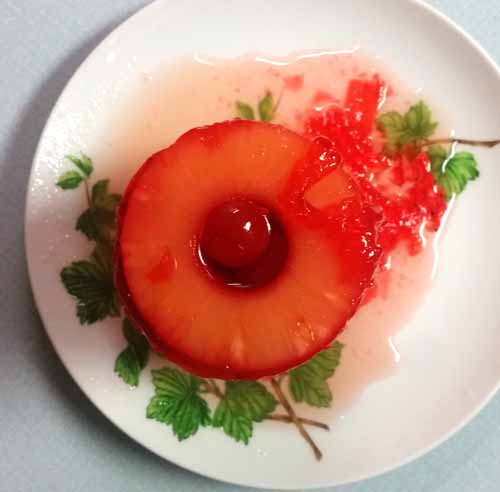 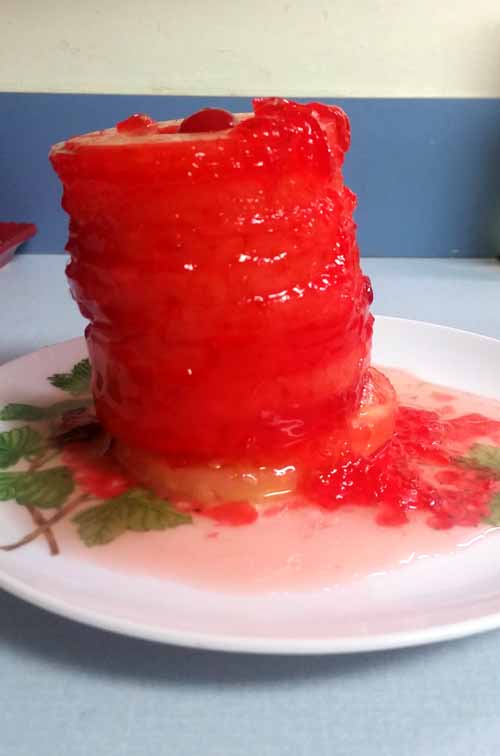 Do you remember that movie Poltergeist?  Where Carol Ann was trapped with the ghosties and they hired Tangina & Co. and they sent Diane into the light to rescue Carol Ann?  And when they were pulled out they were covered in ghost goo or whatever like this:

My fucking pineapple rings were abducted by ghosts!!!  This is what I get for going out on New Year’s Eve instead of staying home like I usually do!  Totally preventable tragedy.

Aside from the obvious “abducted by ghosts” explanation, I figure I *might* have screwed up in one of the following ways:

So annoying.  Delicious, but annoying.  Really, pineapple and the cherry gelatin totally go together, and the maraschino cherries were a welcome addition to the party.  Kiddo LOVED it.

RIP, pineapple surprise. You were delicious, but not so pretty to look at.  I’m sorry I failed you. 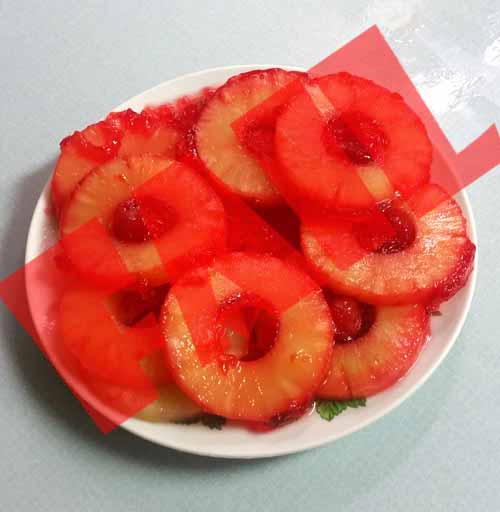 And as I was writing this I dug up the actual recipe.

OH FUDDDDGGGGGEEEE.  You know where I went wrong?  The part of the directions where it said (underlined, even!) to use HALF of the amount of water I would usually use.

BWAAAAAHAHA!  Man, I totally screwed this up!  It was delicious, but still…not pretty!  I am going to hopskipjump my ass straight to the kitchen to try this again.

Dammit.  Of course I have a fail on the second time I do a Cooking the Oldies post.  Will try harder next time, kids.  😉

UPDATE!   Oh yes, this was such an epic fail it appeared on Pinterest Fail!  I am so proud!

Previous Post: « Out with the old…a summary of 2015.
Next Post: Feel the Bern with this FREE crochet (or knitting or crafting) 8 bit chart! »