I used Red Heart Reflective yarn to make a trick-or-treat bag for kiddo a few years ago. He gets so many compliments on this bag when we are out treat gathering, so I thought I’d share so you all can make one for your favorite little trick-or-treaters, too!

This yarn is really fun to take photos of!  Here it is with no flash: 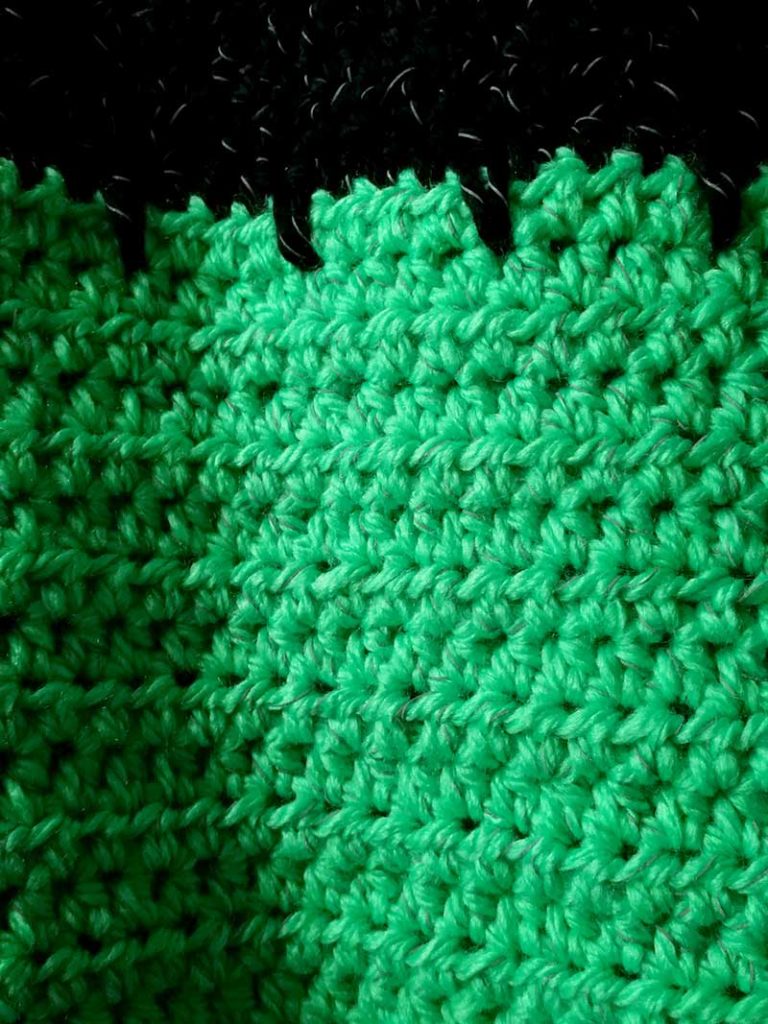 And with the flash: 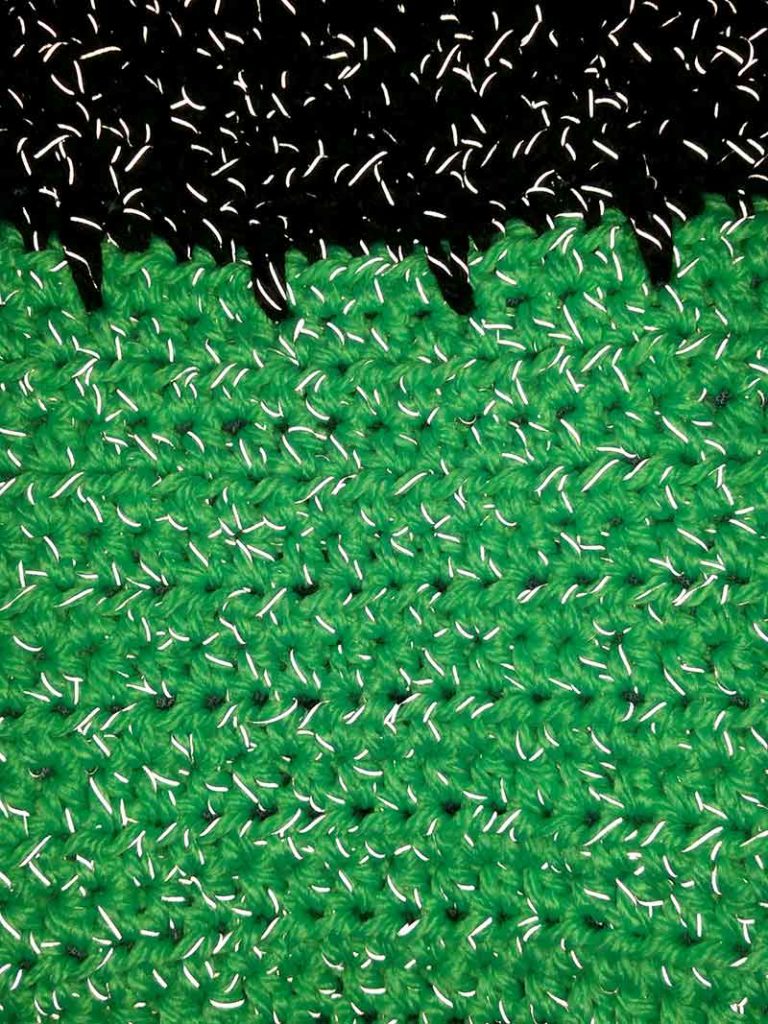 I haven’t seen it in the craft stores this season, but you can get it on Red Heart Yarn’s website or on Amazon. The only store I’ve ever seen carry this yarn on the shelves was A.C. Moore. I did see it there a few months ago at the tippy top of the Red Heart wall, but with a limited range of colors. Online is your best bet.

This trick-or-treat bag has now been road-tested and has withstood the abuse of three Halloweens – it’s been dragged across the pavement, stuffed full of goodies, used as a Lego tote in the off season – still, good as new.  I am SO impressed with how well this yarn has held up over three years, and Smalls is looking forward to using it again this year! 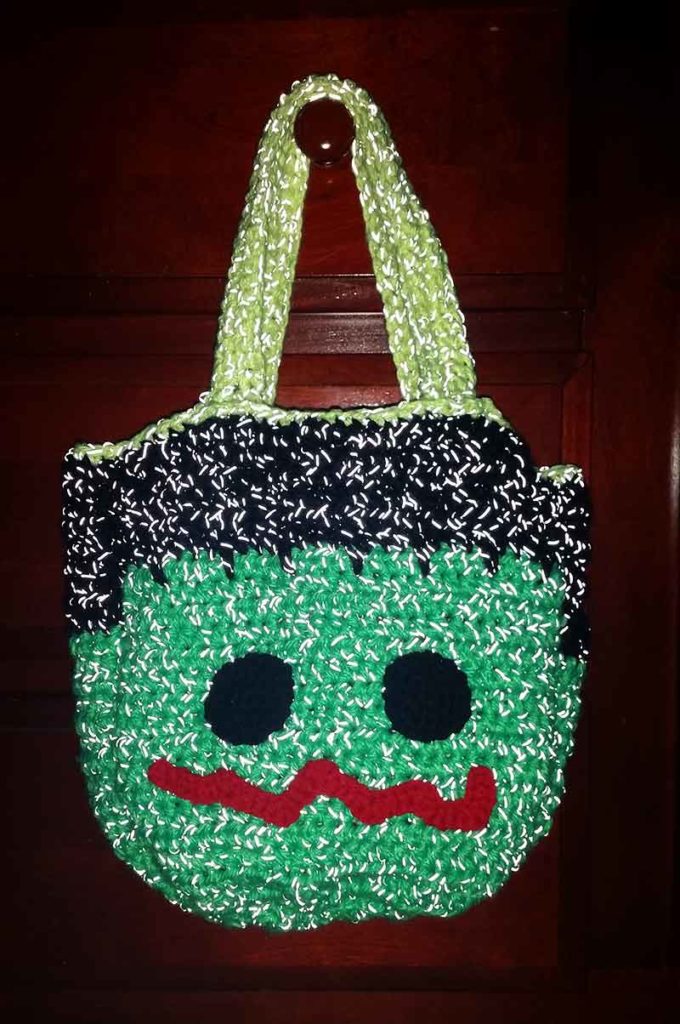 Frank is going to stomp through town, smash pumpkins, steal candy, and TP your trees. Nobody can stop him because he has Powers of Electroglow!!!  Touch him and BZZZZZZZZT.  Fried fingers.

He doesn’t look so scary in daylight, though: 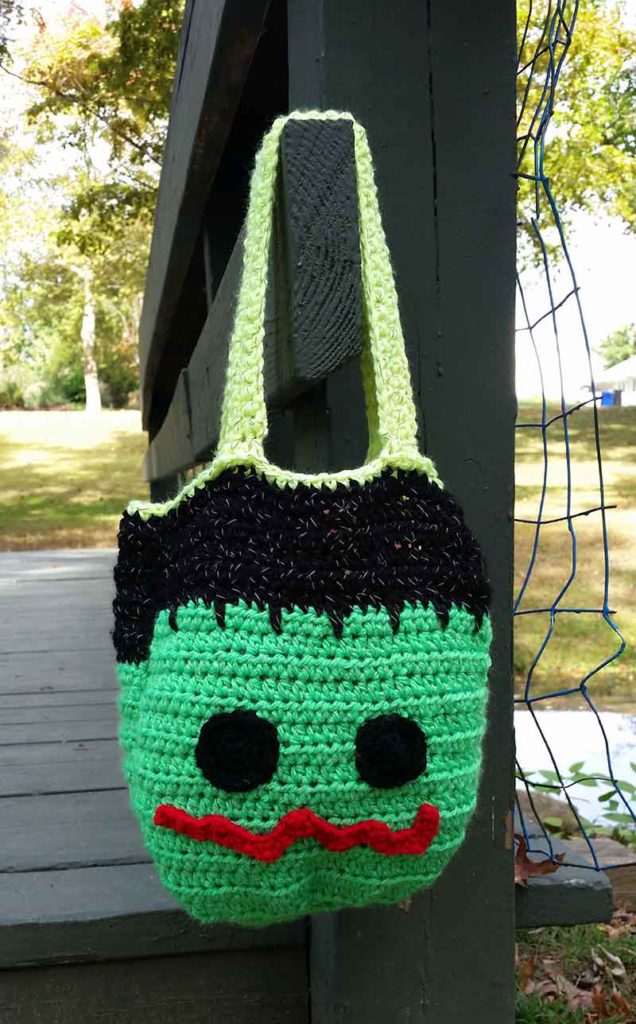 Using Red Heart Reflective for trick-or-treat bags makes a tote that is perfect for toddlers and bigger kids alike – it’s large enough to hold a few cans of soda and a bulk buy bag of chocolate. The yarn is bulky which makes this a quick project if you can stop taking pictures of it as you go. 😉

The reflective bits makes it perfect for trick-or-treating when the sun dips below the horizon.

The best thing about this bag is when your kid goes to the door the nice treat-givers are like, “Oh, wait a second, let me go in the back and get the KING SIZE M&Ms for YOU, cutie!”  (This is totally true. I’ve seen it happen.)

Since you’re going to sneak the M&Ms out of your kids’ bag the second they go to sleep, making this bag is an investment in your future.

I didn’t write this pattern, though I did modify it a bit to work with the yarn I had on hand and changed some construction details.

A word of caution: Be prepared for people to ask you to make one for their kid next year. Have business cards ready.

I started with this pattern.  (FREE!!) 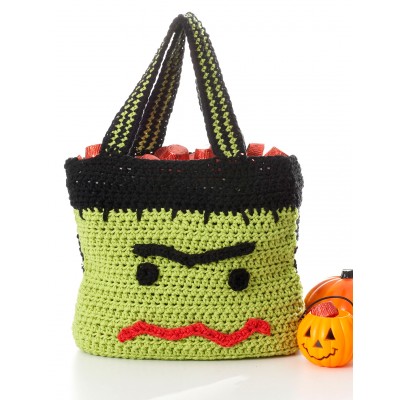 This pattern conveniently has side gussets, all the better for holding monstrous loads of candy. 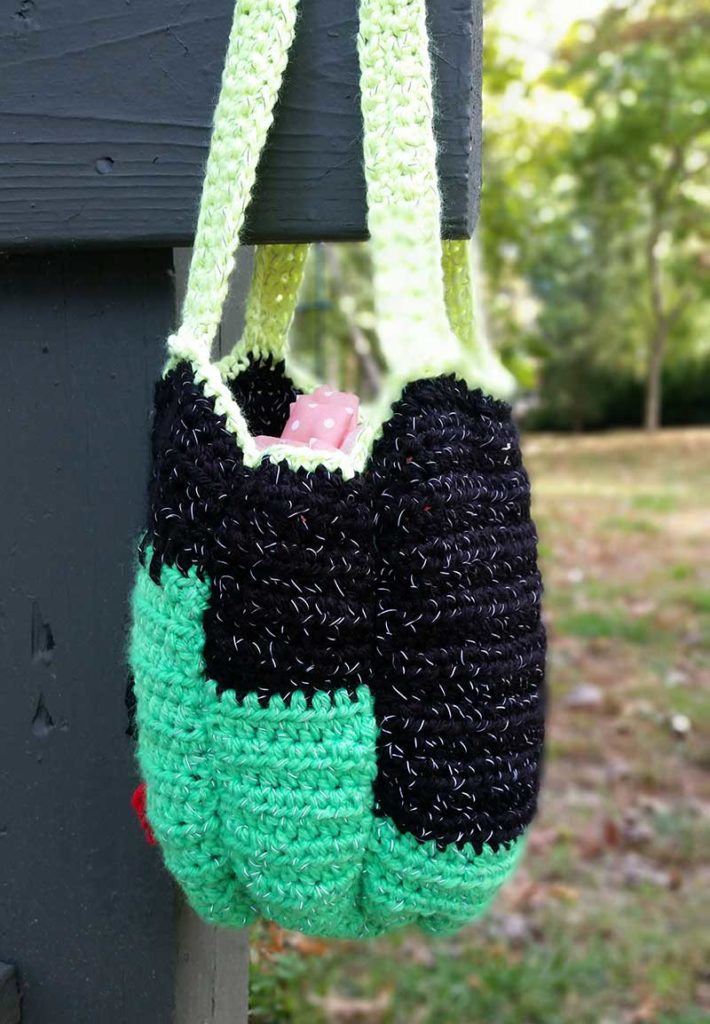 First, I basically followed the pattern instructions, but used a Size I hook to accommodate the bulkiness of this yarn.  My gauge was different from what was specified, so I just followed the dimensions provided in the pattern.

Super-easy, you can do it!  Just make notes on the row count as you go.

Next, when it came time to seam up the pieces, I decided to slip stitch crochet, rather than sew. This yarn is slippery and I wanted nice, sturdy seams.

When you weave in your ends with this yarn, it’s a good idea to throw a few knots or Fray Check into the mix.  I don’t usually like knots in my work, but this yarn is really slippery. You NEED the extra security here considering the amount of wear and tear this bag will get.

For the handles, I decided it would be safer to crochet them on than it would be to sew. them. I made an edging with single crochet around the top edge of the bag and hooked the handles on as I went.  Easy-peasey.

My Frankenstein hairline is a little different from the one in the pattern, because I had only one skein of black yarn and two skeins of green. I just gave Frank’s hair a little trim by subtracting rows of black from the back and sideburns, and adding more green monster skin.  I squeaked by with one skein of black, used about a skein and a half of green, and had lots of the yellow skein leftover.

If you want to avoid complicated math and cursing, you’ll need two skeins of black, two skeins of green, and one skein of yellow (or whatever color you’d like the handles to be).  You’ll also need a small bit of red yarn for the mouth and black yarn for the eyes.  I just used regular old worsted weight acrylic for those because I thought it would be cool if they didn’t glow. 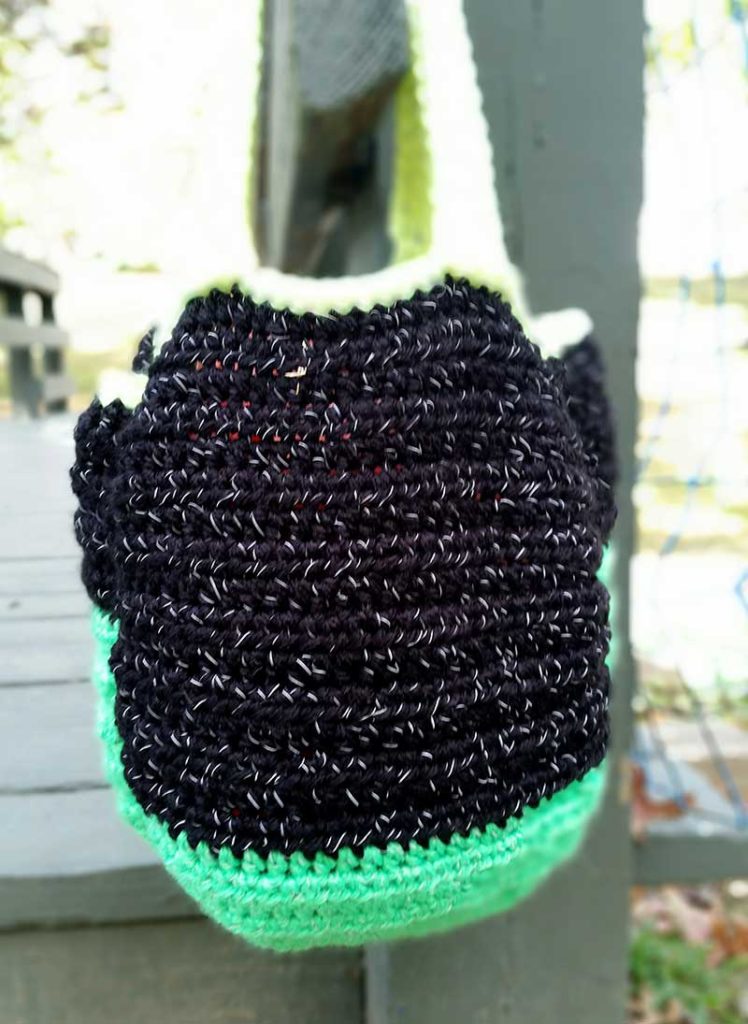 (There was a little math error that resulted in my ripping the gusset out and making it longer, but we won’t talk about that.)

Finally, I modified Frank’s face a bit because we were going for cute, not scary.  No mean old eyebrows!  Yes bigger eyes!  NO frowny face! 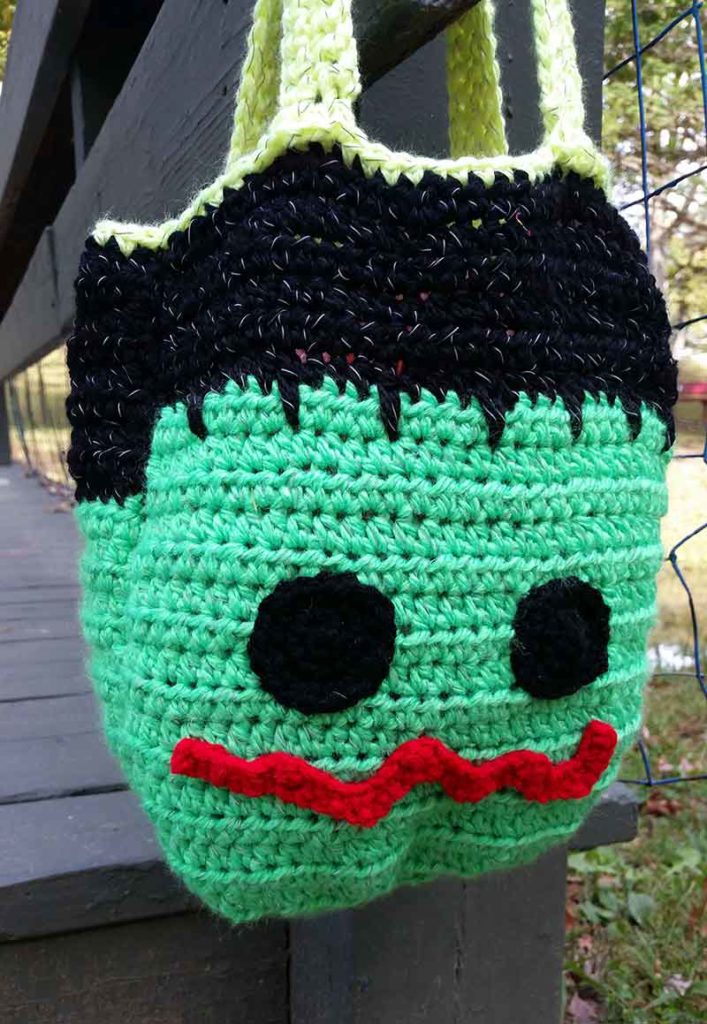 In the end, I was SUPER thrilled with this project and it only took a couple of hours (and some cursing at the splitty yarn).  I expected splittyness because the texture of the reflective bits is very different from the yarn itself.  That’s totally ok here, because the end result is awesome.  Some projects are worth the extra hassle, and this is one of them.  There are no words for how much I love this yarn. 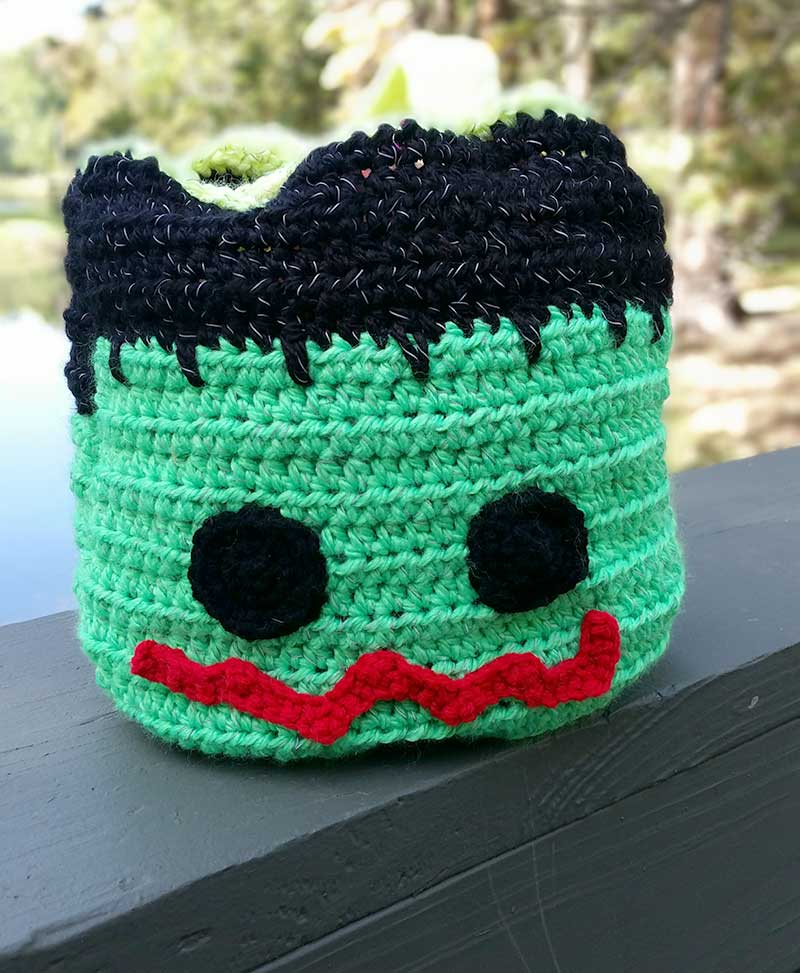 If I were going to make this project again, I would rework the pattern to reduce the number of seams that need to be sewn or hooked together.  That was by far the hardest part of this project and I think with a little re-design, most of them could be eliminated. 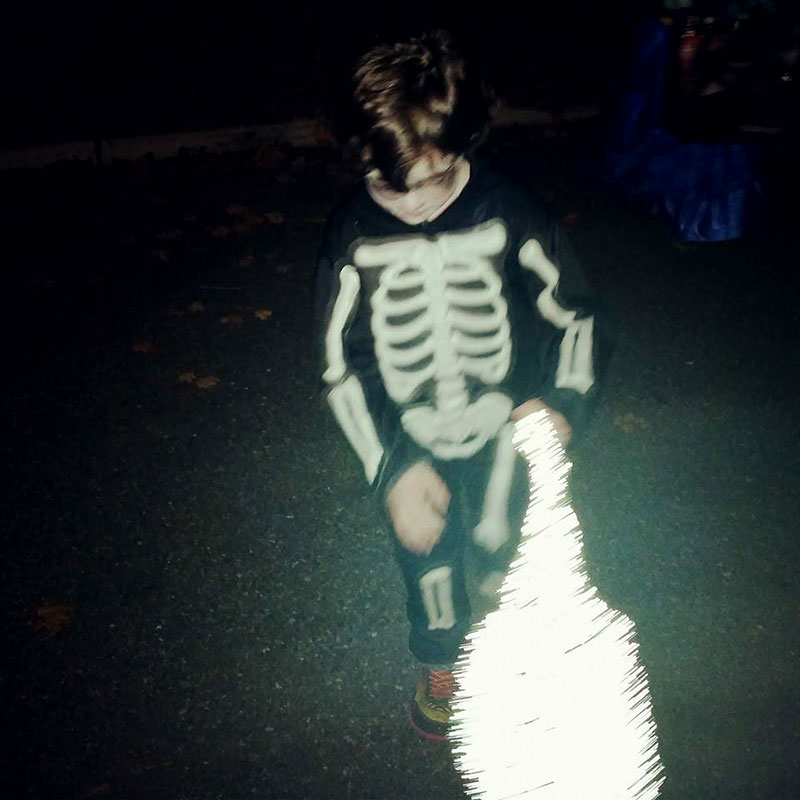 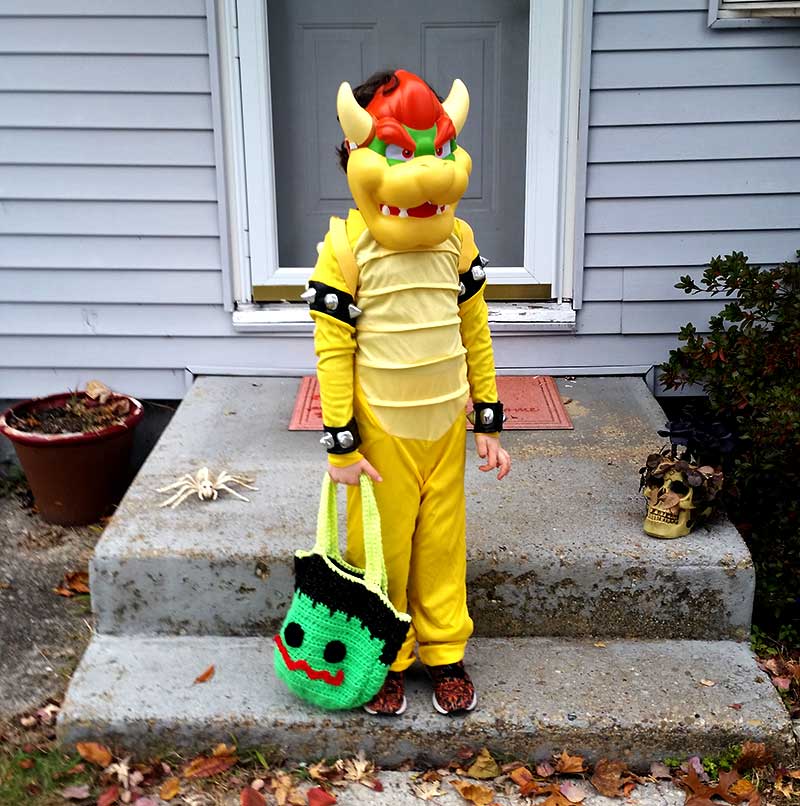 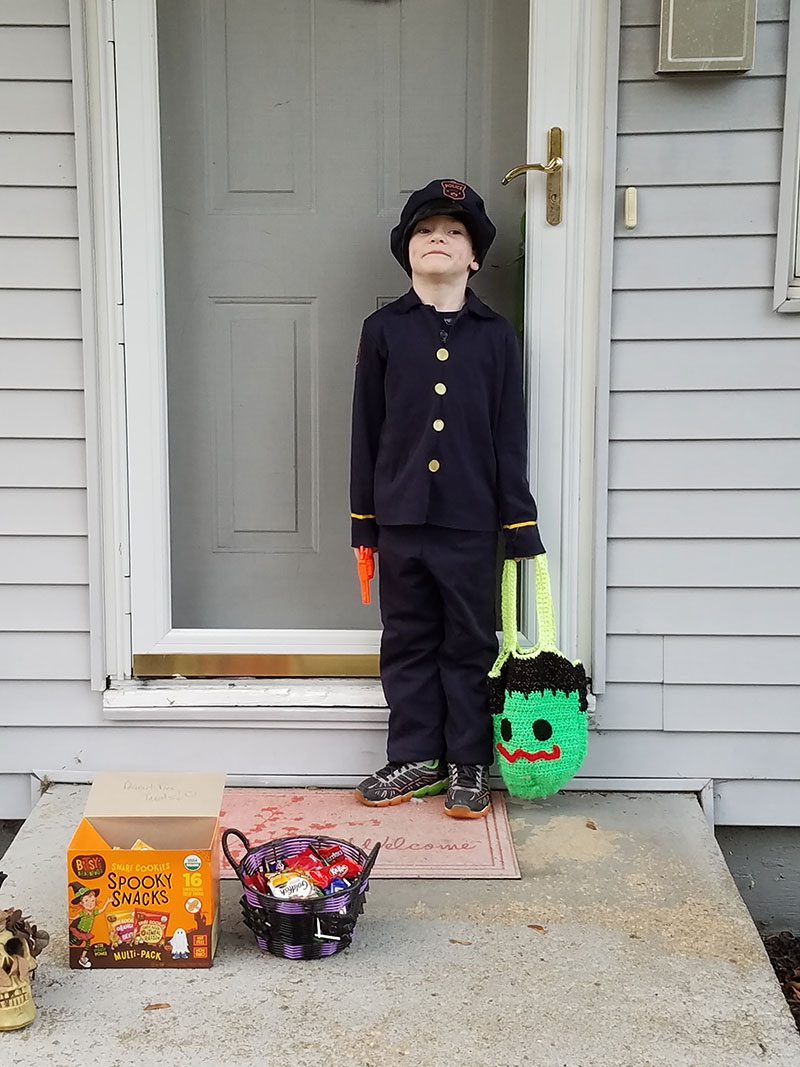 I hope you enjoyed this pattern makeover!  If you loved it, don’t forget to Pin and share! 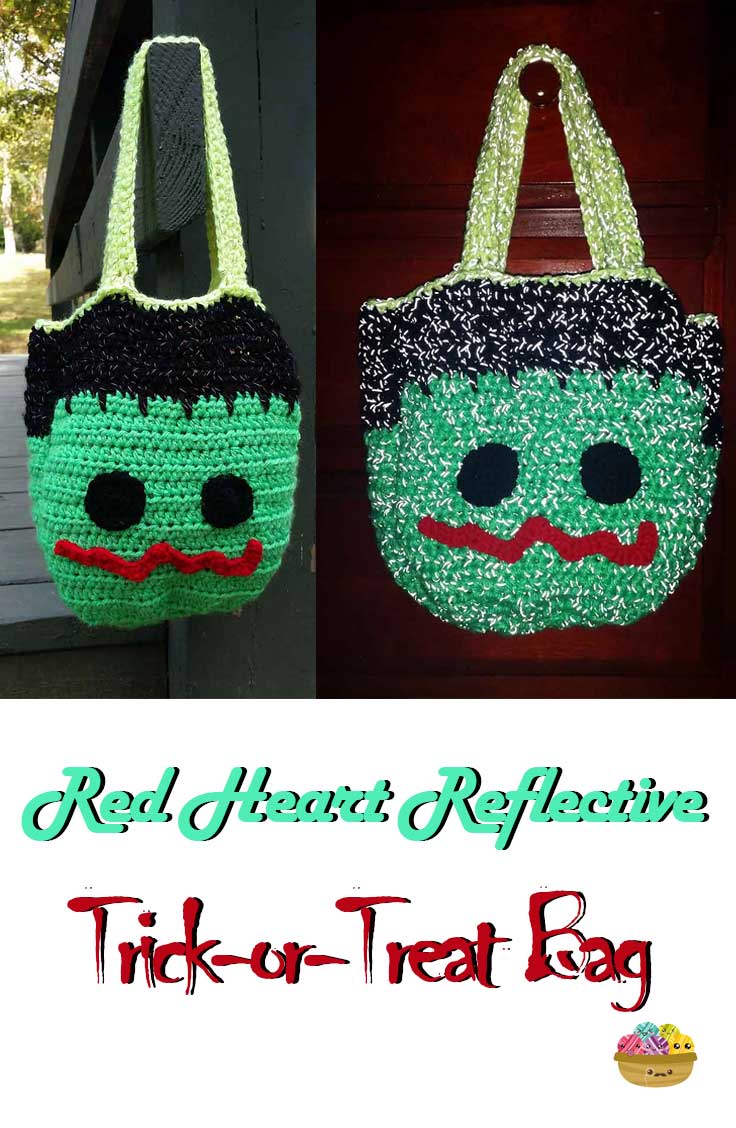 Previous Post: « How to find more time to get crafty
Next Post: God will not strike you down if you crochet in church »