I’ve been plagued with some thorny pattern design issues this past week, so I decided to go check out a new hiking trail that just opened near us – Tranqulility Trail in Woolwich Township.  Getting out in nature and moving around clears my brain like nothing else can.

Tranquility Trail is part of a larger Open Space and Recreation Plan in Woolwich.  The plan includes building a trail system which connects local parks and neighborhoods.  I’m so happy they are marking efforts to preserve the beautiful open spaces near where I grew up.

Tranquility Trail is so new that there are no signs, and it doesn’t yet appear on a map.  The article said the trail is “off High Hill Road,” so I figured I could make a good guess or two and find the trail head.  If you’re not a local and want to go check it out, it’s right about here on this map: 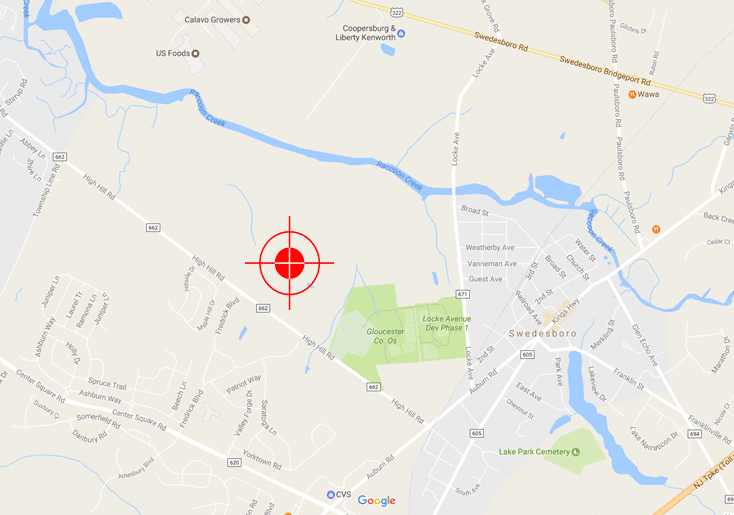 Luckily, my first guess was correct and we found the trail head at the back of a shiny new parking lot.  We were the only people there, probably because it was a cloudy, breezy day. 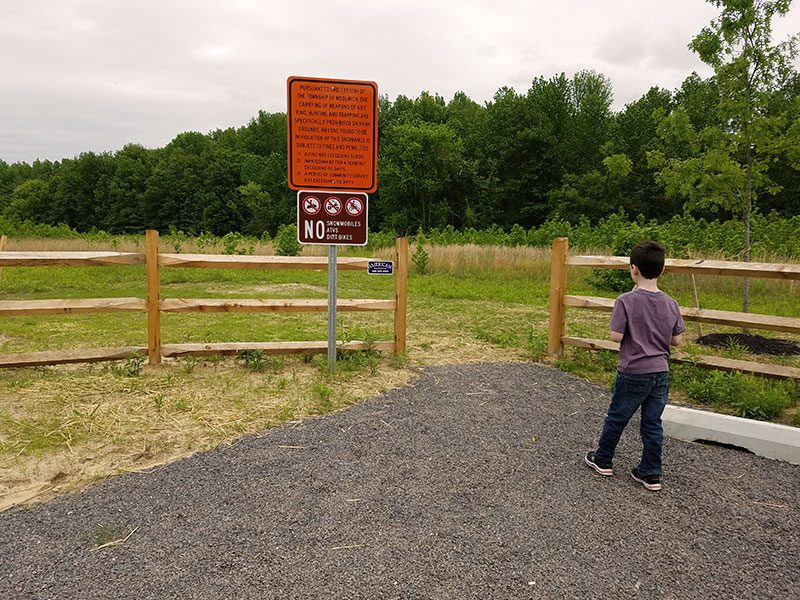 It was pretty clear which direction we were supposed to go, even though there weren’t any trail markers. 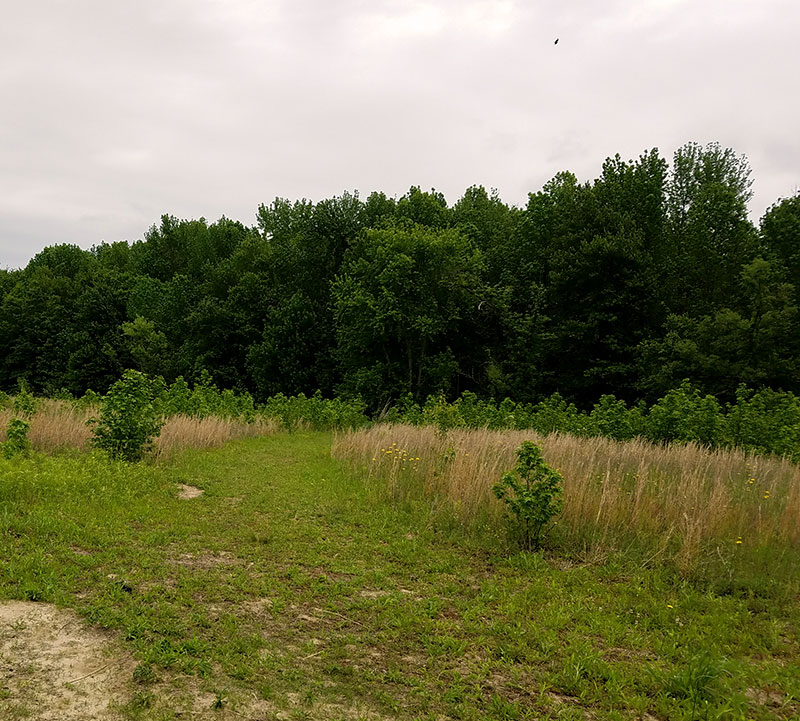 Just after we stepped into the woods, Smalls found something fun.  He had a very good time jumping on those boards to make mud squish out. 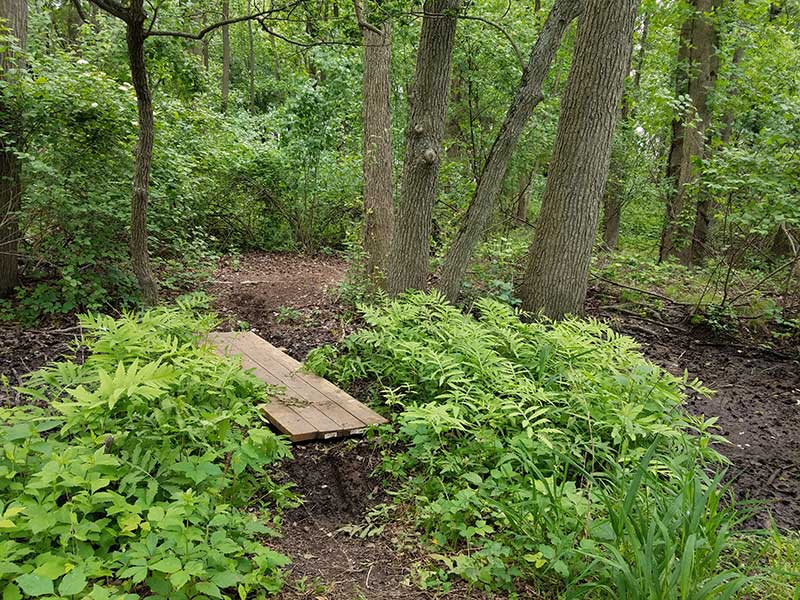 The path through the woods was pretty. 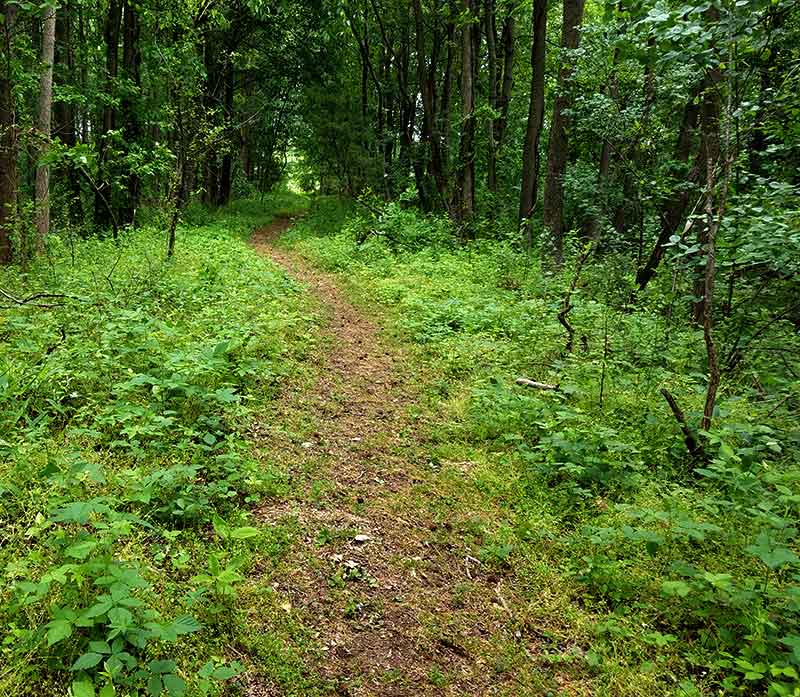 The woods opened up to a large, grassy field with an old, rusty piece of farm equipment in the middle. 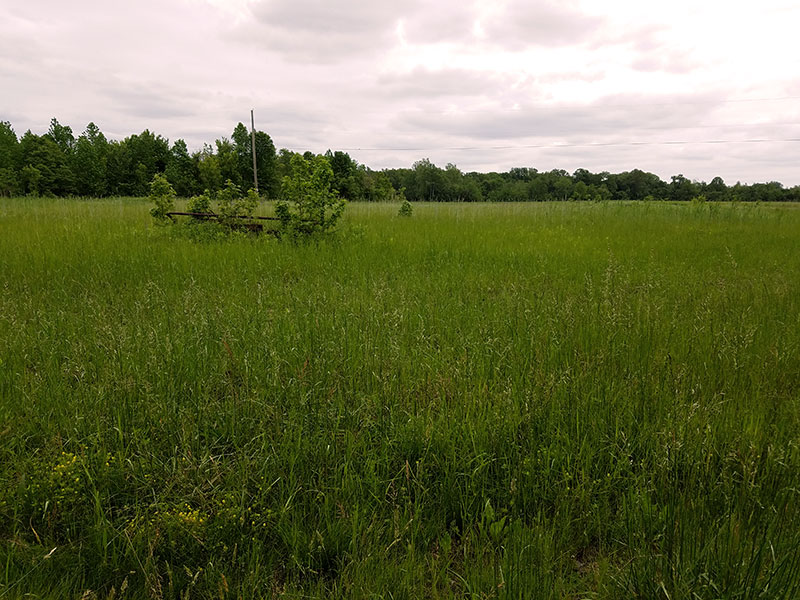 This part of the trail was more tractor tracks than hiking trail, but I figured Smalls was heading in the right direction because of the orange sign.  Thank goodness we put on lots of tick spray! 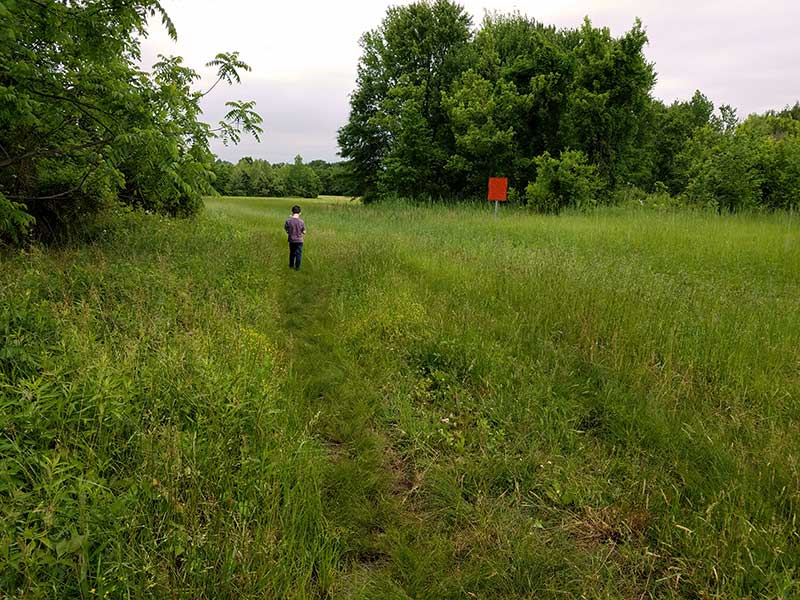 There are many open fields along Tranquility Trail.  I love it because it reminds me of when I used to go hiking as a kid.  We didn’t have organized paths or anything, just tons of farms and woods to wander through.  These days…not so much. 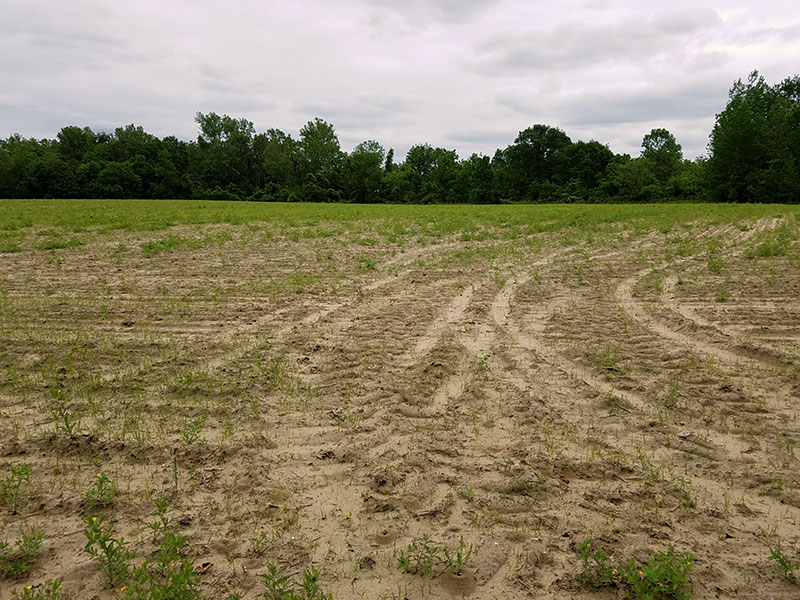 Smalls thought the trail wanted us to go across the field.  I thought it was supposed to go along the edge of the field.  *shrug*  I won that one, though it’s possible I was wrong.  😉 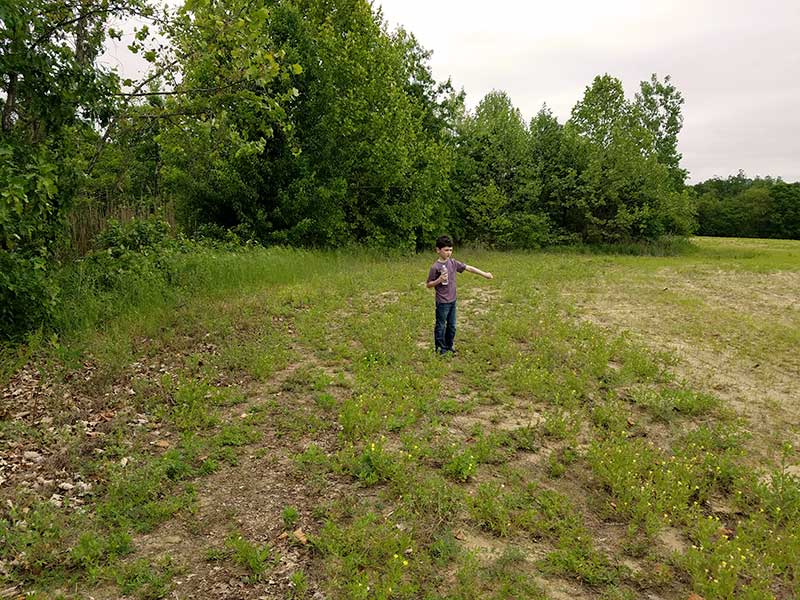 There were loads of these cute little flowers which are probably weeds. 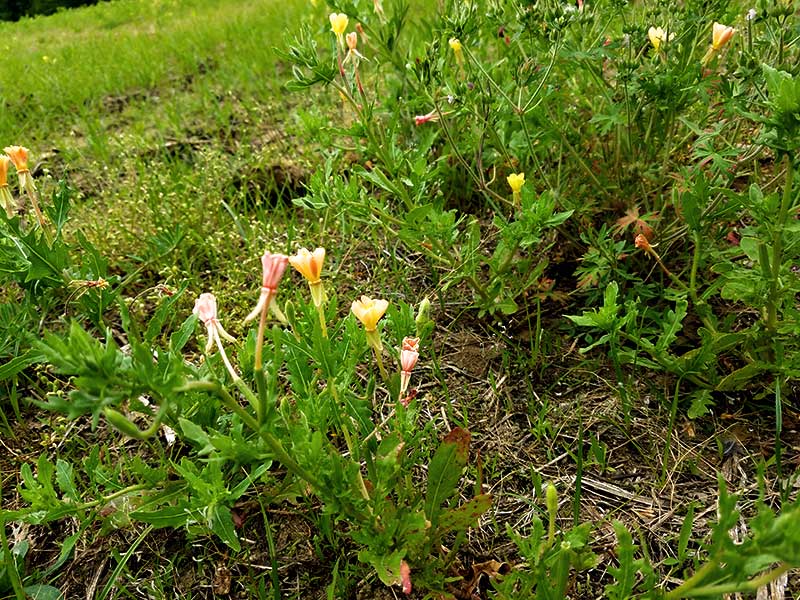 And these pretty purple flowers which were blowing around in the wind too much for a proper photo. 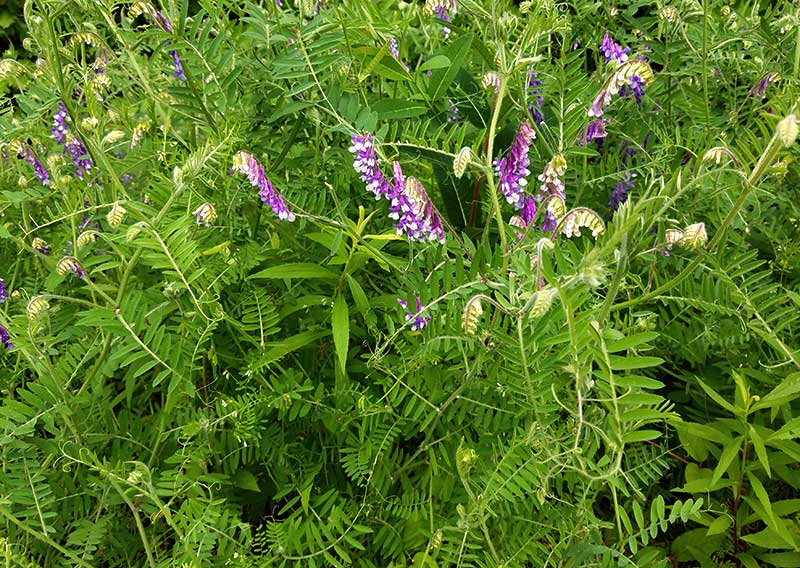 And these pretty flowering bushes! 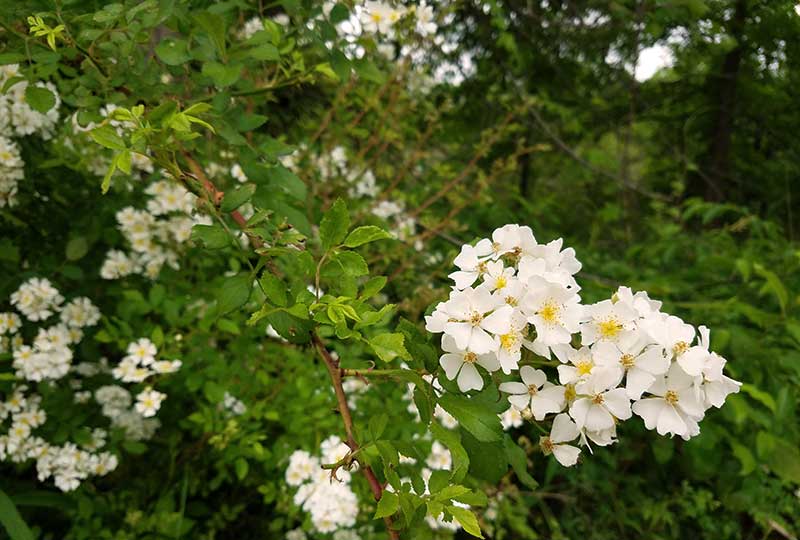 While we hiked, every once in awhile we smelled honeysuckle.  We didn’t actually see any until the way back.  Smalls was pretty impressed when I showed him how to drink a flower. 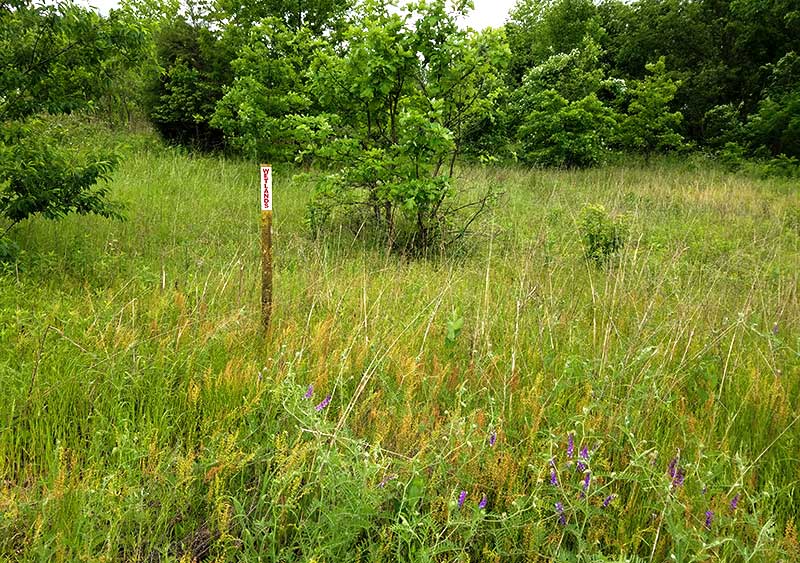 The trail (well, at least the trail we followed) borders a large area of wetlands, which are super important to our ecosystem. 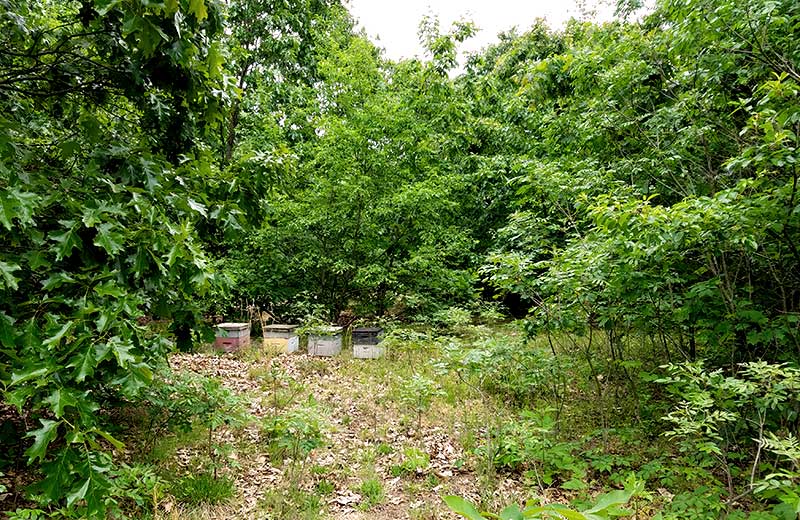 Surprise!  Beehives tucked back in the woods!  We tried to listen for buzzing, but the wind rustling through the reeds was too loud. 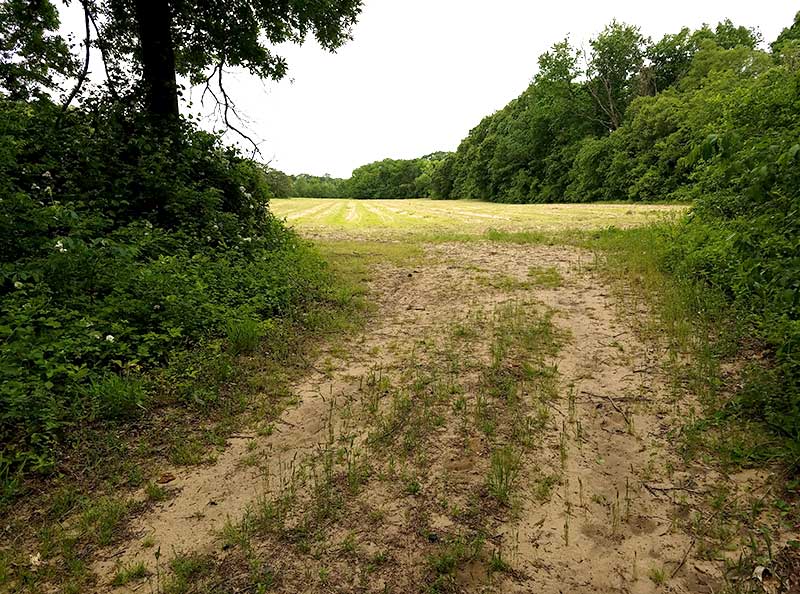 After a small patch of woods, the trail opened out onto a large field again.  There weren’t any markers one way or the other, and we had to choose either left… 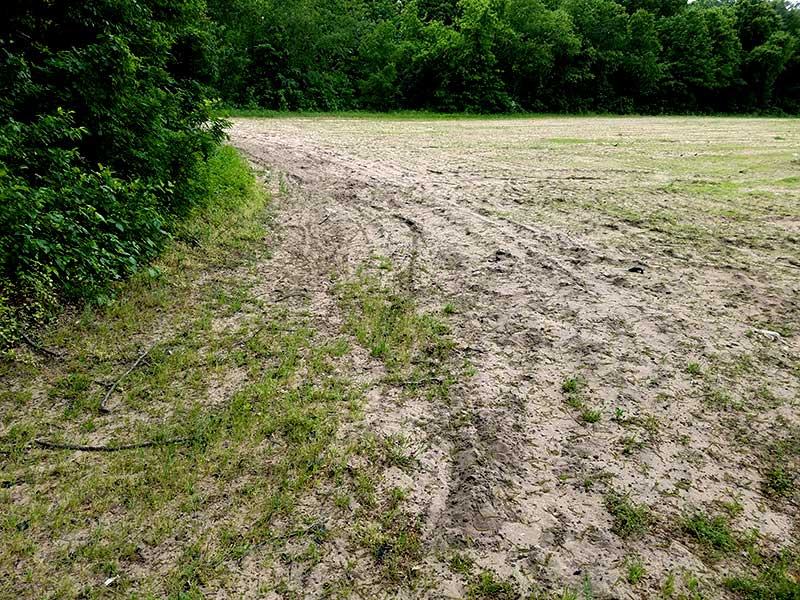 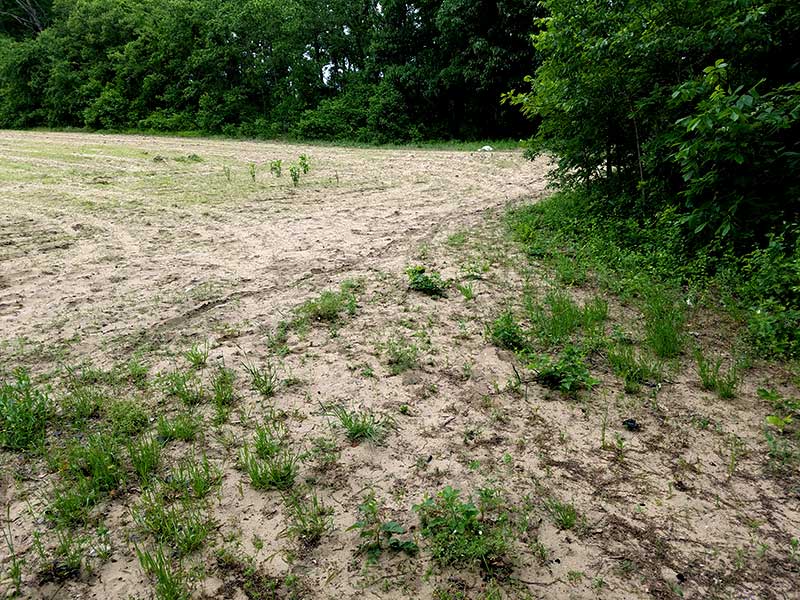 Both looked just as promising, so I left it to Smalls to decide.  He picked right, and off we went for a lonnnnnnng walk down the side of the field.  I could see Raccoon Creek through the woods, so I’m guessing we were on the correct side of the field.

The only marker I saw of any kind was this tiny blue flag about halfway down the field. 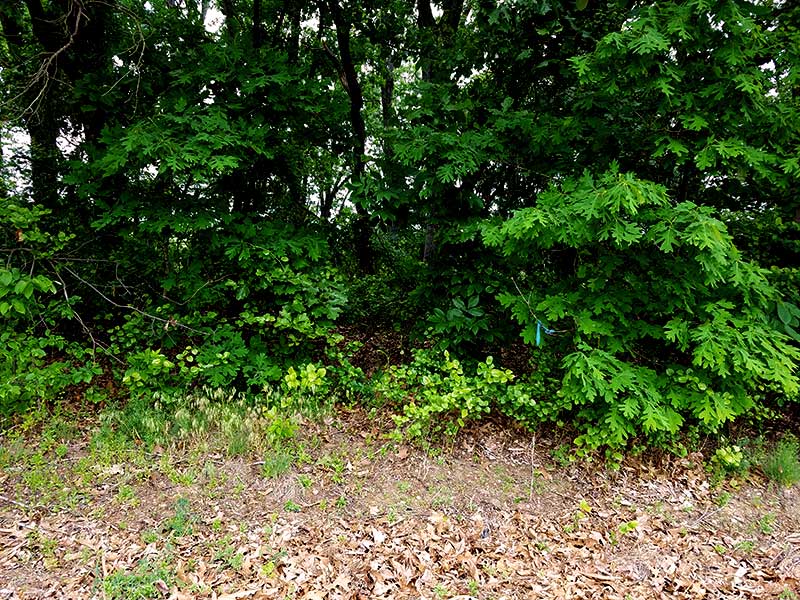 We walked a bit past that, trying for the end of the field at least, but Smalls started to grump about his feet being tired.  There really wasn’t anywhere to sit because there were ant hills and yellow jackets all around.  So, we turned back home.

On the way back I did take a peek to see if there was a path where the blue flag was.  It doesn’t seem to have been cleared – there was a giant sticker bush right there, and also a large spiderweb – so I didn’t get too far in.

Tranquility Trail was a super nice hike even though we didn’t make the loop.  (Er, does it have a loop?)  I am looking forward to getting to the bottom of where it actually goes!  That may be a mama-only hike.

I’m sure there will be trail markers and such in short order.  It’s very new and those things take time.

Also, as the article linked above mentioned, they’ll be planting flowers in the fields.  It will be gorgeous when it’s in bloom!

I do hope they do a better job clearing the grassy area on that one part of the trail. I feel silly noting that because when you go outdoors you run into nature (including ticks). Bug spray which contains DEET and all of the other ordinary tick precautions are a really good idea on any hike.  Cutting back that grass a bit would help reduce my chances to get up close and personal with the nasty little bloodsuckers, and would be greatly appreciated.  =)

Have you been to Tranquility Trail yet?  Set me straight!  Did we make a wrong turn or not go far enough down that last field?

I’m looking forward to doing much more hiking and outdoorsey things this year (I think Smalls may be big enough to hop in a kayak with me!), and also breaking out my big girl camera rather than being lazy and just using my phone.  Where should I go next?